Skip to content
DAVID HAYE has called out Tyson Fury for a fight AGAIN and says he’ll only return to boxing to face the ‘No1 heavyweight on the planet’. The 40-year-old predicted Deontay Wilder would beat Fury on Saturday and reclaim his WBC and Ring magazine titles. Haye’s prediction almost came in as Wilder knocked Fury down TWICE […] ...

DAVID HAYE has called out Tyson Fury for a fight AGAIN and says he’ll only return to boxing to face the ‘No1 heavyweight on the planet’.

The 40-year-old predicted Deontay Wilder would beat Fury on Saturday and reclaim his WBC and Ring magazine titles.

Haye hasn’t had a professional boxing fight since 2018[/caption]

Haye’s prediction almost came in as Wilder knocked Fury down TWICE in round four.

But the Gypsy King recovered and finished the fight in round 11 with a devastating knockout.

Haye says he’s ‘100 per cent serious’ about fighting Fury, despite not stepping inside a boxing ring professionally since 2018.

He told iFL TV: “I’m 100 per cent serious. I’ve said that the only person I’d put my body through a come back for would be for the number one heavyweight on the planet.

“There’s no reason why I’d punish myself and do what I need to do to put myself in a position to give myself any time of chance if it isn’t for the big one.

DON'T COUNT ON IT

“Hopefully when team Fury crunch the numbers… something’s going to happen in the next two months when they’re going to be looking for an opponent. I know how big time boxing works.

“When he works out what money is generated with a Hayemaker fight vs any of the other options, although on paper they may be more respectable… he knows it’s out there.”

The two Brits were set to fight back in 2013, but Haye pulled out with a week to go due after receiving a cut during sparring.

The fight was rescheduled for 2014, but the ex-champion withdrew with a shoulder injury.

Haye is hoping he’s third time lucky, but Fury’s dad John reckons he’d give the Brit a run for his money instead. 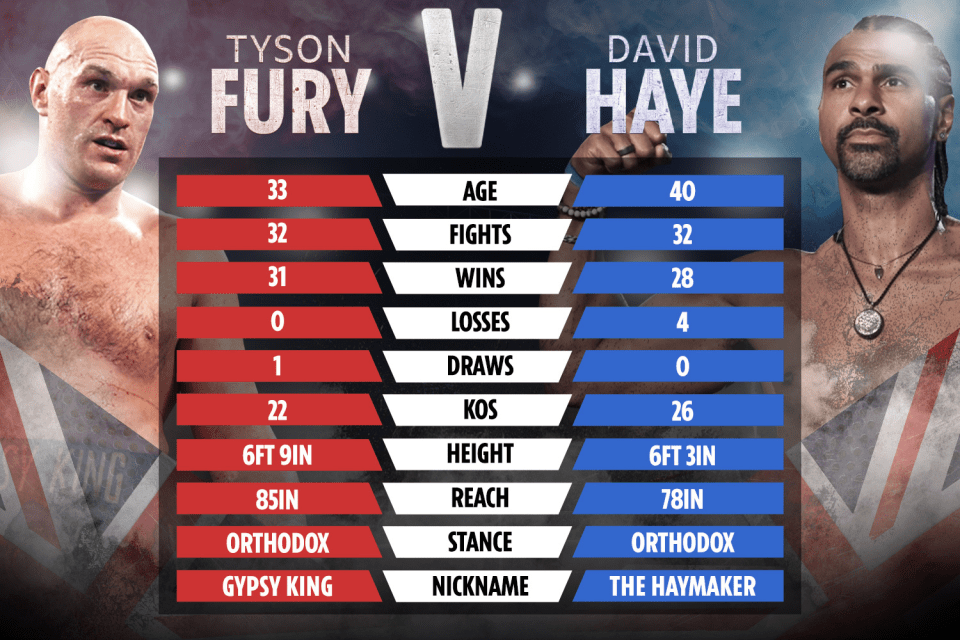 ““He’s lived the high life, his bones are like a china pot – they’re brittle – and at the end of the day, what’s he done when there’s been a lot of good contenders? Work like a Blackpool donkey to get a shot at the title.

“Dillian Whyte has been waiting five years! Why should David Haye get a shot? What’s he done? Other than a ballet dancing competition with his mate.

“He’s just a fool and you know what happens to fools, don’t ya? They get hit by brick walls.”

CLICK HERE FOR LIVE UPDATES ON FURY VS WILDER 3