Skip to content
In a decade, players have been graced with now eight distinctive Far Cry experiences from Ubisoft that all have a core focus at play: explore a massive open world as you slowly erode a dictator’s power until they can be toppled. Players have done this time and time again, from Hoyt Volker and Pagan Min […] The post Far Cry 6 Review – Anton Castillo Will See You Now by Kai Powell appeared first on Wccftech. ... 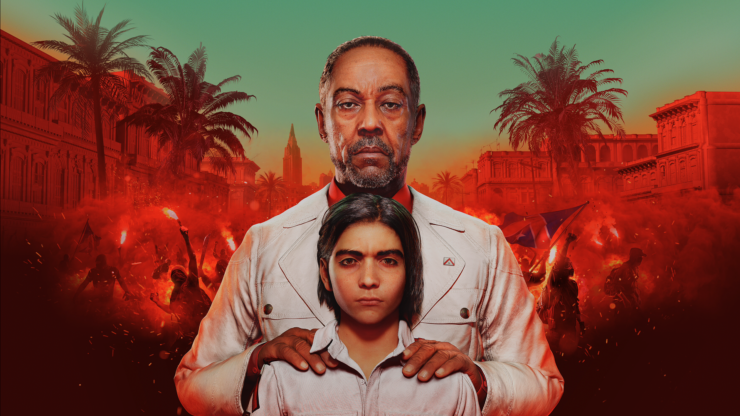 In a decade, players have been graced with now eight distinctive Far Cry experiences from Ubisoft that all have a core focus at play: explore a massive open world as you slowly erode a dictator’s power until they can be toppled. Players have done this time and time again, from Hoyt Volker and Pagan Min to Joseph Seed and now Anton Castillo. Each time, a new region of the world and a new power struggle but a familiar tale nonetheless. With the power of next-gen consoles and Giancarlo’s acting prowess, will players enjoy exploring the fictional nation of Yara for blood and glory once more in Far Cry 6?

Far Cry 6 notably casts Giancarlo Esposito as Anton Castillo, the dictator overseeing an island nation whose primary export is Viviro, a cancer treatment developed from tobacco found only within those island borders. True to most Far Cry villains, Anton Castillo is ancillary to the story and only present in few moments throughout the open-world campaign. Across the more than 40 hours of playtime I put into Far Cry 6 ahead of review time, I counted less than twenty minutes of digital Giancarlo gracing my screens, not counting the countless streams of propaganda across all of Yara’s television and radio waves. 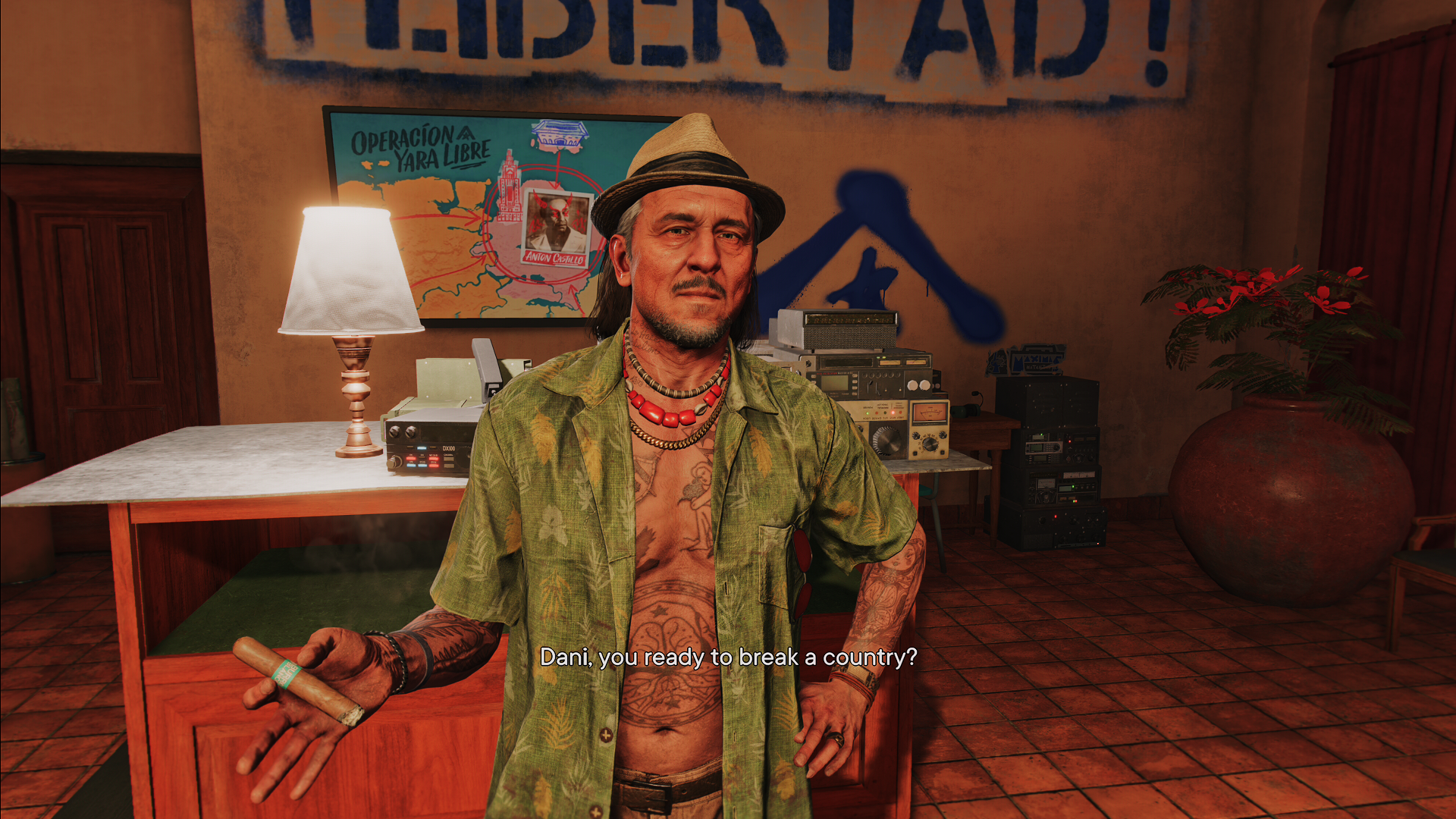 To work your way up to meeting Anton Castillo face to face, you’ll first have to disrupt his hold over the region through liberation. Originally partnering up with Libertad (a small faction of guerrilla fighters and washed up arms dealers), Dani Rojas branches out to hit the Castillo regime where it hurts the most: their centers of commerce and export, their ministry of art/propaganda, and the labor camps that weed out any that aren’t so-called ‘True Yarans’ into drafts of slave labor. Along the way, players will integrate themselves among the various guerrilla factions of Yara together with Libertad to build up a coalition capable of overtopping Castillo’s iron grip of the island nation.

For as formulaic as the Far Cry series has gotten, Ubisoft has done the unthinkable and gotten rid of the towers that plagued so many of their open-world adventures. Instead, hearing about new points of interest is made to feel organic from overhearing conversations with fellow soldados or reading about a mysterious treasure hunt on a hastily scribbled memo left behind by someone forced off their homestead. In practice, you usually see people standing around a base you just liberated with a clipboard calling out Dani’s name until you exchange a few words and get a new marker added to your map. It’s how I learned of most of the checkpoints and ambushes to undertake, while upgrading the main camp often provided the opportunity to purchase maps of a particular objective. Sometimes just airdropping to an unlocked base and flying off towards a random direction can prove to be just as effective for locating new points of interest. 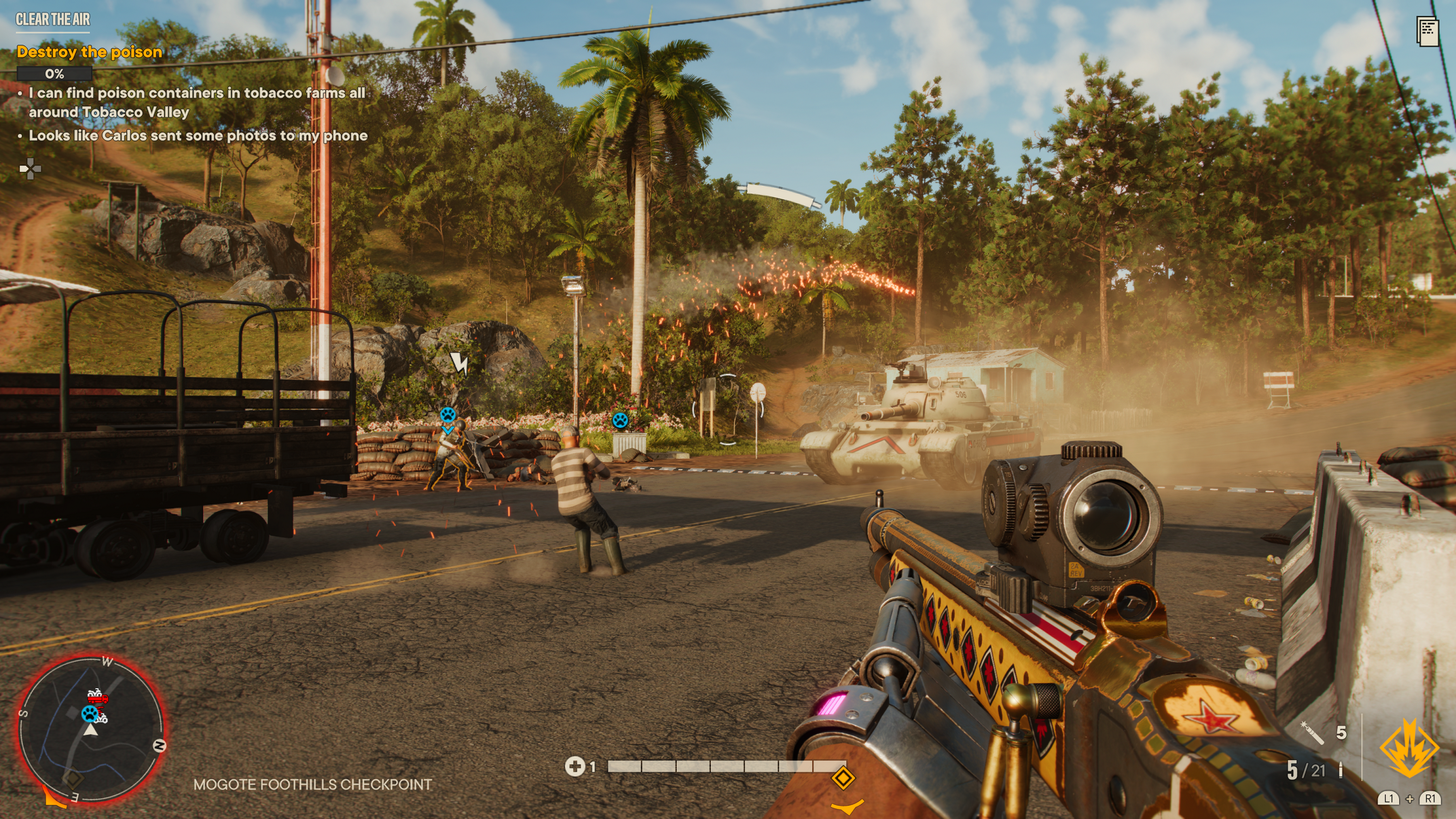 Far Cry 6’s biggest strength is also one of its most glaring weaknesses: the scope of Yara. The island country is easily Ubisoft’s largest open-world map to date, but when you get past the scale of the world, that sensation that bigger isn’t always better sets in after the first dozen hours of roaming around from point to point. Ubisoft knows that players would want to get from point A to point B quickly and has put up numerous roadblocks in place. Military checkpoints deploy road spikes to shred the tires of any road vehicles driven through if you don’t liberate them first. Any approach from the air is also quickly shot down unless anti-aircraft installations are destroyed and overtaken to clear the skies in that specific section of Yara. Feasibly, you could hop into a motorcycle and do a multi-hour loop around the island to liberate these outposts to make getting around faster and sidestep the slow pathfinding through the world.

No matter the mission type or side objective, Far Cry 6 can be molded to the player’s preferred method of play. If you want to go loud with explosive weapons, that can often work out just as well as a silenced approach. Far Cry 6 holds the most extensive weapon roster in the series, and there’s always a gun that matches how you want to play at that exact moment. Each standard weapon you come across can be customized with a variety of weapon parts, each built from materials and cash scattered throughout Yara, from scopes and incendiary ammo to silencers. A silenced headshot from most weapons is a one-hit kill, and if you grab yourself a Rifle with Armor-Piercing Rounds, you can take out nearly any enemy in the game with a single shot. The downside to silencers is that they all come with a slight drawback, usually reduced range or quicker overheating. For the SKS rifle that carried me through the entire game, a rank 4 Large Cylindrical Suppressor was good enough for clearing out entire enemy bases without having to reload and the cooling-off period on the suppressor was such that by the time I killed one enemy, the barrel was cool enough to continuously fire without worrying about the suppressor breaking and notifying enemy guards. Many unique weapons you’ll find throughout Yara already come with mods permanently installed, which are useful if you find them early on. However, the customizable weapons beat them nearly every time given the additional number of mods you can install. 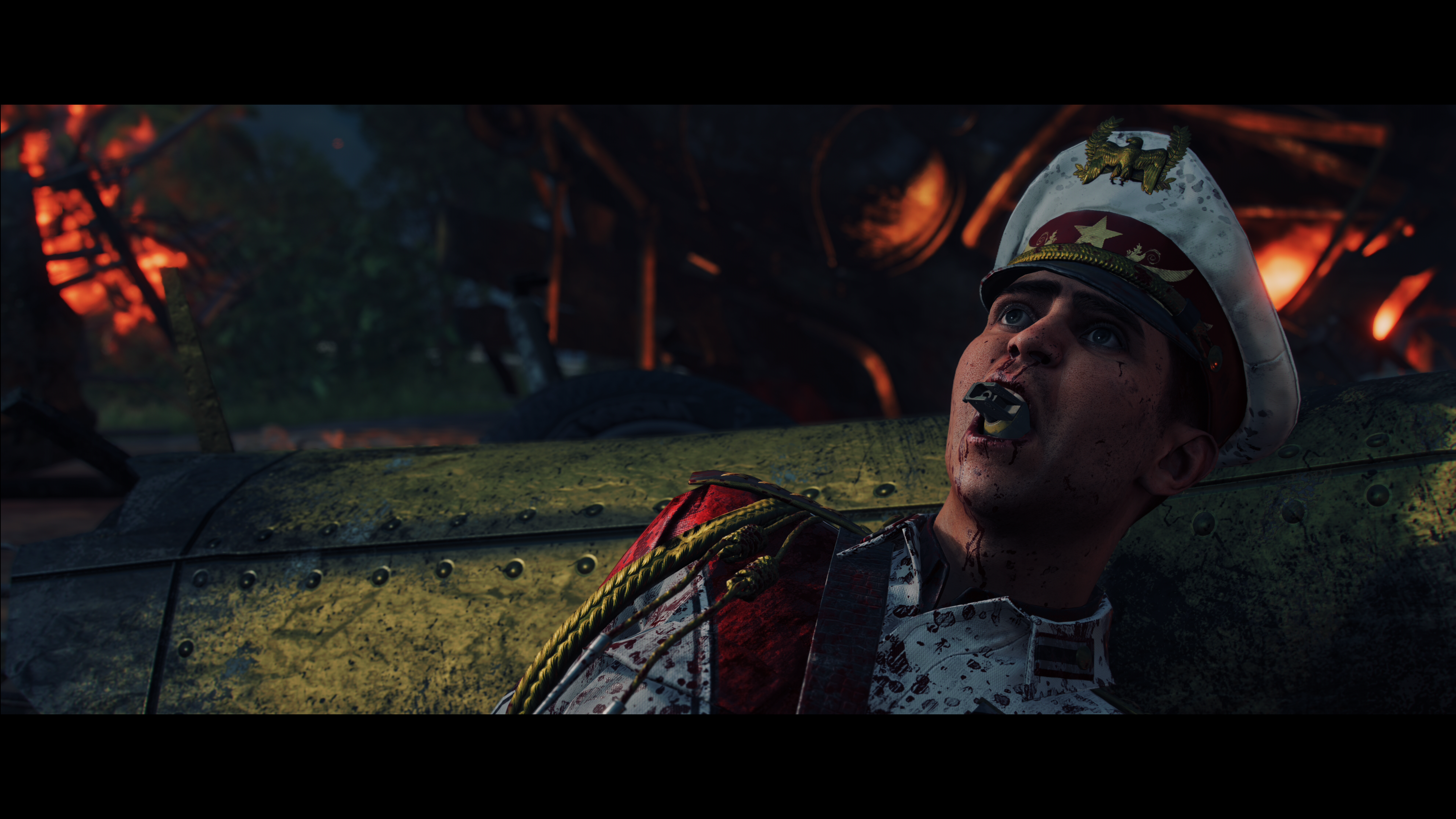 The real powerhouse of Dani’s guerrilla tactics comes in his Backpack, handily called a Supremo. These setup Dani in a variety of classes and a unique ability triggered on L1+R1. Want to rush in and kill everything? Pick the Gladiador and juice yourself up for chained Machete Kills. Want to play solo? Put on the Medico defender Supremo and revive yourself if you get blown up by an unseen tank. I could see these being more beneficial in the special ops/multiplayer scenarios but for single player, I kept the Medico on at all times to save the hassle of accidentally blowing myself and having to restart from the last checkpoint on a mission.

Far Cry is historically about chaos and that shows off in Anton Castillo’s world in Far Cry 6. With the freedom to play as you want, most missions will usually end up in explosions followed by constant quips and one-liners delivered across the in-game comms. There’s always a strange tonal shift from going full John Rambo and clearing out an enemy base of Castillo loyalists only to be rewarded with a cutscene of someone being tortured or a story character being laid to rest. There’s never any sense of care placed into these heavy moments, and I never felt like a main character’s death meant anything more than not hearing them opine again about seeing Anton’s head on a pike. And if you really want to look at some of the strange humor and strange shift to guerrilla warfare, look no further than this short poem penned by a True Yaran who might be Gurbanguly Berdymukhammedov in disguise. 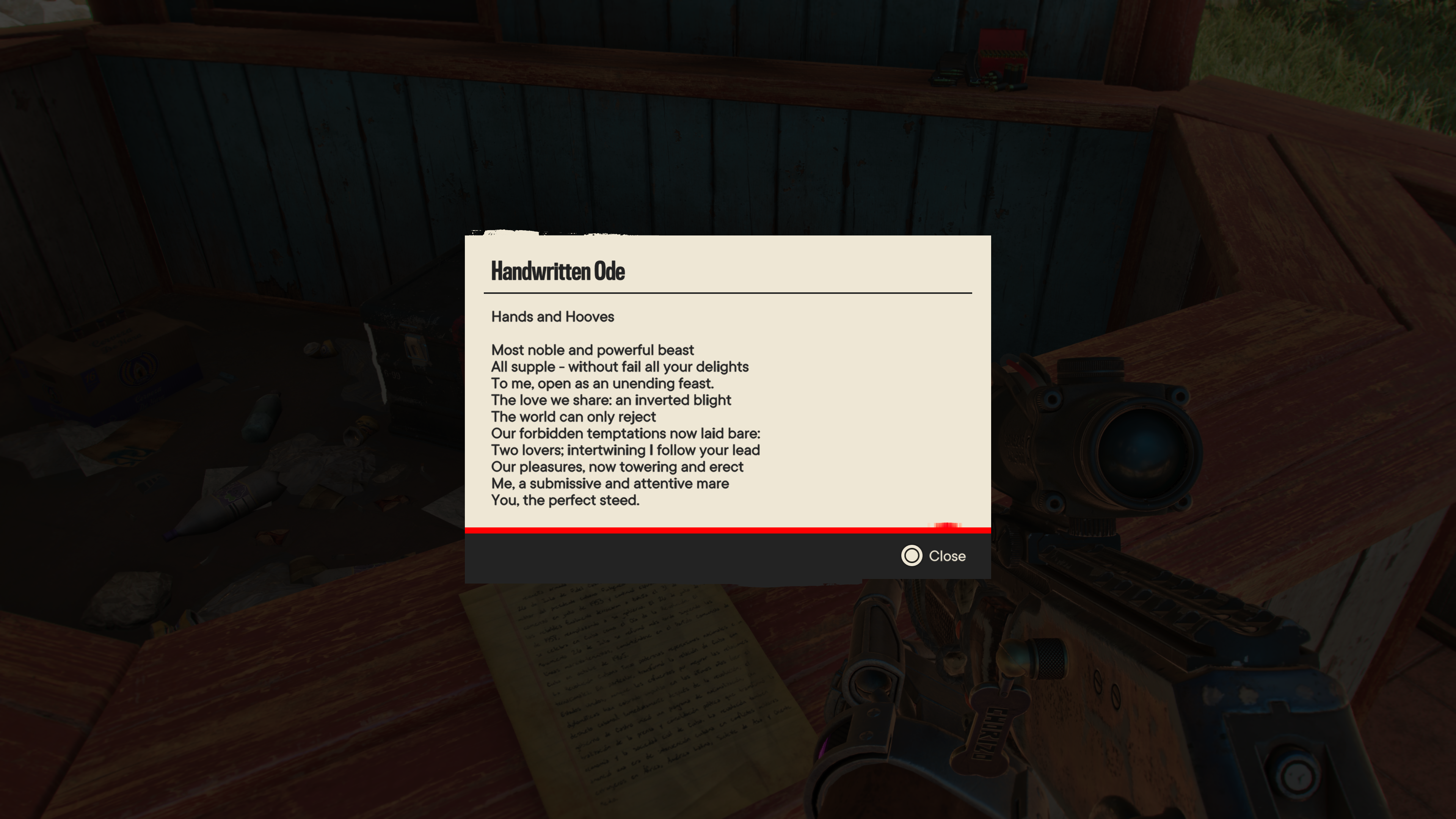 On PlayStation 5, the performance of Far Cry 6 is subpar for a game of its pedigree. With an optional HD texture pack, the game looks fantastic when you just stand back and watch the chaos act itself out. However, in motion, this is one game that never failed to give me a headache. From the horizontal screen tearing to the wildly fluctuating 15 FPS in-game cutscenes to the horrible chromatic aberration while drinking and skydiving, there’s so much to the action that can give anyone motion sickness. A last-minute 27GB patch dropped on PlayStation 5, fixing some of the performance issues, but most glaring annoyances were still present even hours after the review embargo lifted.

The fantastic acting chops of Giancarlo Esposito may be the main draw to Far Cry 6, but let it be known that what you’re getting is pretty much the status quo for the series thus far: a sprawling open-world map with a dictator whose presence you’ll barely feel beyond the opening and closing acts, humor that falls flat the third or fourth time you hear the same sexual euphemisms presented in different ways, and a gameplay loop that caters more towards the audience that cares more for the moment to moment action rather than a gripping narrative of toppling an evil dictator. Anton Castillo fits perfectly within the mold of existing Far Cry antagonists: ruthless, willing to do anything to maintain power, and ultimately window dressing and motivation to keep players exploring another Ubisoft open world.

Upon liberating Yara on behalf of Libertad, you’re gifted with Far Cry 6’s other form of multiplayer: Insurgency. All of this can be done solo, but it’s worth saving it for online because they link together the Special Operations here. Finishing the story campaign results in Castillo and FND loyalists taking the country back over little by little. Each week, an entire region is flipped, and you have to re-capture a base, anti-aircraft station, checkpoint, and one of the randomly selected Special Operations. Once finished, an Insurgent Leader appears on the map much like the leader of any other base. Defeating them unlocks a ton of Moneda for buying rare weapons as well as a Dead Drop key that unlocks a Special Operations crate. In the one I cleared for the review, I was rewarded with a Hula Hurk bobblehead for my ride. This endgame content adds in new weapons, but when your existing loadout works just as well, I was left wishing there was something more engaging.

Perhaps it’s a combination of staying too formulaic to the Far Cry principles of the last seven games or just a burnout in open-world experiences in general, but I found myself less enamoured by the breadth of the world and technology powering the explosive gunfights. On its own, Far Cry 6 is fine (although the star power of Giancarlo Esposito is wasted), but there’s little innovation to entice longtime fans of the series.

Reviewed on PC and PS5 (codes provided by the publisher).