Skip to content
FROM the extraordinary ring walk to the explosive stoppage, it was a bravura performance. Tyson Fury was carried into the ring, shoulder high on a throne, in a crown and regal robes, singing along to Patsy Cline’s Crazy. Scroll to the bottom of the page for all the latest updates… He had told us all […] ...

FROM the extraordinary ring walk to the explosive stoppage, it was a bravura performance.

Tyson Fury was carried into the ring, shoulder high on a throne, in a crown and regal robes, singing along to Patsy Cline’s Crazy.

He had told us all week that he’d overpower the heavyweight division’s greatest knock-out artist, Deontay Wilder, but few believed he was capable of winning in the manner he did.

Roared on by thousands of British and Irish fight fans, Fury performed a demolition job Fury so comprehensive that there was little appetite for the trilogy bout in Las Vegas in the early hours of tomorrow.

That re-match – after a thrilling draw in Los Angeles in December 2018 – was almost 20 months ago now, shortly before the global sporting lockdown.

And it often seems to have been forgotten quite how spectacular Fury was on that incredible night in Sin City.

During the height of the pandemic, British fans dreamt of an all-British fight between Fury and Anthony Joshua for the undisputed crown.

It was widely assumed that, should such a contest take place, Joshua would be the people’s champion, with overwhelming support.

Yet Fury, who’d been to oblivion and back before his first flight with Wilder, is now, without doubt, the greatest heavyweight on the planet.

And should he reproduce anything like that display against Wilder – inside and outside of the ring – he might just become the world’s most popular heavyweight too.

While Joshua has always been slick, photogenic and blue-chip, Fury was the rough-edged traveller with the scattergun mouth, the pantomime villain.

In recent years, Fury has cut out the worst of his tirades – the fire-and-brimstone homophobic rants.

This is a deeply complex character, who suffered from serious mental health issues after dethroning Wladimir Klitschko with a masterful display of ring-craft back in 2015.

But while always unpredictable, Fury can be compelling, amusing, lyrical and is a natural showman.

In contrast, Joshua can seem over-produced and stilted.

The schooling he received in his defeat by Oleksandr Usyk at Tottenham Hotspur Stadium a fortnight ago, suggested that Joshua overestimated his own boxing abilities and was gun-shy when he ought to have been targeting a stoppage.

We always knew Fury was capable of out-boxing and out-pointing any other modern-day heavyweight.

He has probably won 16 of the 19 rounds he has fought against Wilder, yet was robbed of victory in the original fight, having ducked, weaved and showboated his way to superiority until his brutal final-round knockdown and Lazarus-style rise from the canvas.

Before that first bout, we had assumed Fury was far too early in his comeback to take on an unbeaten Wilder for the WBC crown. We were wrong.

Before the second bout, we knew he was a far superior boxer but we did not see him piling into the American from the first bell to the surrender of the towel from trainer Mark Breland in the seventh. Wrong again.

Fury and Wilder are only getting it on again because a US judge compelled it – just when it had looked like Joshua-Fury would finally happen this summer.

That Usyk defeat means we are less likely than ever to witness that ultimate battle of Britain – it is a potential fight which has lost much of its prestige and intrigue.

Nobody outside Joshua’s inner circle can now believe the Watford man has a cat in hell’s chance of defeating Fury.

As for Wilder, well he always has a puncher’s chance. Even though he tested Fury’s jaw, and his stomach for the fight, when they first met in LA.

Surely, though, Britain cannot lose two world heavyweight champions in as many weeks?

Re-watch that second Fury-Wilder fight and it’s impossible to imagine the complete reversal of fortunes required for an upset this time around.

From the left-right combination that floored Wilder in the third, to the body-shot which sent him sprawling in the fifth, to the mighty straight right, which ended the fight with the man Alabama pinned in the corner, Fury’s dominance was complete.

If we want to speculate, we’d be better off wondering what sort of ring walk Fury has planned this time and what sort of karaoke tune he might croon in the ring afterwards.

What happens in between feels as close to inevitable as heavyweight boxing can ever get.

What time does Tyson Fury vs Deontay Wilder 3 start?

What TV channel is Tyson Fury vs Deontay Wilder 3 on and can I live stream it? 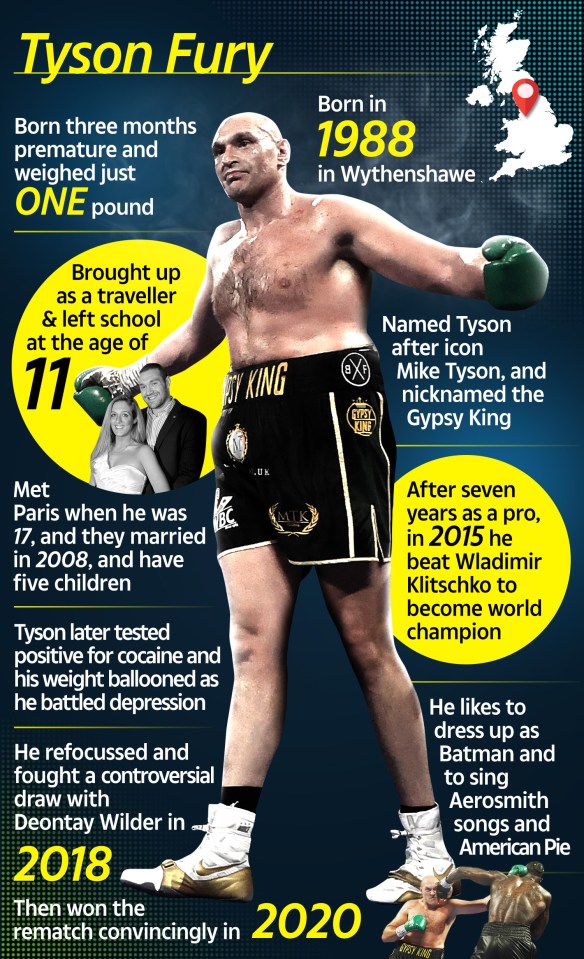 What is the venue for Fury vs Wilder 3?

Who is Deontay Wilder's girlfriend Telli Swift, and when did he get divorced?

What happened at the weigh-in?

Tyson Fury and Deontay Wilder both weighed in at their heaviest ever weights.

The Brit came in at 19st11lbs – five pounds heavier than in the pair’s second fight.

And at 17st, Deontay Wilder weighed in at a full half a stone heavier than he did in his last bout with Fury.

Fury, known traditionally as a great boxer but not so much for delivering knockouts, promised more of the same after he bulked up to KO Wilder in the seventh round 18 months ago.

The Gypsy King promised his extra weight would mean “total obliteration of a dosser. Total annihilation”.

Fury also mesmerised the crowd by stepping onto the scales in the same hat The Undertaker wears.

The champ was compared to the WWE legend during his first fight with Wilder when he looked to have been knocked out cold but got up to beating the count in the 12th round.

And going into this bout, Fury promised the Deadman that Wilder would “Rest in Peace”.

Wilder meanwhile sacked a member of his team, Mark Breland, for throwing in the towel last time.

But Fury labelled the Bronze Bomber and Breland’s replacement, Malik Scott, “a pack of losers”.

However Wilder claims he has calmed down since the last fight and is confident of victory.

He commented: “Calmness is the key to the storm. I know that when I’m not calm, my mind is cloudy and you make bad decisions.

“But when you’re calm you can weather the storm, you’re able to make great decisions.

“We have rejuvenated myself, reinvented myself, redemption is upon us and I can’t wait to show the world what I’m all about.

“I’m reintroducing myself to the world as Deontay Wilder.”