Skip to content
SILVESTRE DE SOUSA hasn’t had the ammunition to challenge for the jockeys’ title this season. But the three-time former champ can end the year on a Group 1 high on Saturday with ART POWER. GOLD BET The four-year-old goes for Ascot’s £500,000 British Champions Sprint at 2.00 and Tim Easterby’s speedster looks set to add […] ...

SILVESTRE DE SOUSA hasn’t had the ammunition to challenge for the jockeys’ title this season.

But the three-time former champ can end the year on a Group 1 high on Saturday with ART POWER. 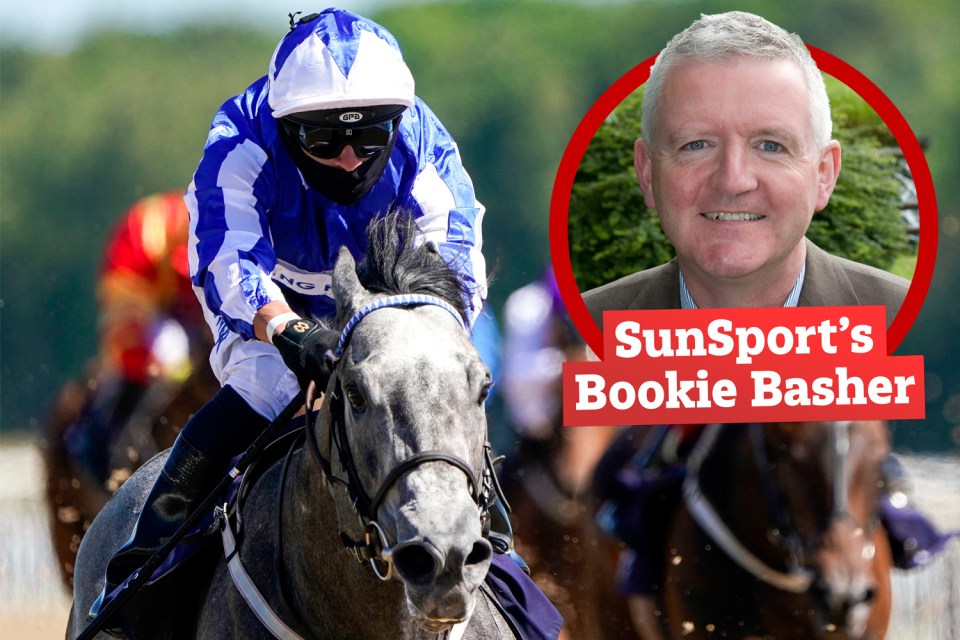 Easterby has campaigned his two King Power Racing-owned flyers with some panache this season.

And while Winter Power’s campaign petered out in Longchamp’s Prix de l’Abbaye 11 days ago, ART POWER looks set to peak at Ascot.

David Allan filled in for De Sousa when Art Power blitzed his Group 3 rivals at the Curragh last month.

But the Saturday Sun Racing columnist knows the horse inside out and rode Art Power to within a length of the winner in this race last year.

Art Power is a stronger and race-hardened sprinter this time around and I’m backing last year’s fourth to take full advantage of ante-post favourite Starman’s recent retirement and give de Sousa, Easterby and King Power a Group 1-winning end to the season.

Most read in Uncategorized

END OF THE ROAD

Corrie's Johnny makes a shock decision about the cobbles

CRASSUS gets the nap vote at the Curragh on Thursday but Keith Dalgleish’s horses continue in excellent end-of-season form all over Britain right now and SUMMA PETO can win the 8.00 at Chelmsford on Thursday night.

Jockey Cal Rodriguez is also at the top of his game and this newly gelded American-bred should be ready to win again after being pulled out of a race at Ayr two weeks ago due to softening ground.

There won’t be any such problems on the Polytrack at the former Great Leighs circuit and Summa Peto can get back to the form he showed before an abortive trip to Royal Ascot in June.

The Scottish raider was Joe Fanning’s first mount immediately after winning the Gold Cup on Subjectivist that day and I’ve long been convinced he’s way better than he was allowed to show when nicely backed at 20-1 in a 29-runner Brittania Handicap where they went 11-2 the field.

BAVINGTON BOB can get the day off to a winning start in the 1.23 at Carlisle and Donald McCain’s SEETHE SEA looks worthy of support under 10lbs claimer Peter Kavanagh in the 2.20 at Wincanton.

The jockey gave this one a great ride to win at Ludlow last week and the seven-year-old can run off the same mark today before a fully justified 9lbs rise for that 16 lengths romp in Shropshire.

Oisin Murphy and William Buick take the jockeys’ title race to Haydock on Friday and I’m backing Buick to motor home on Mick Channon’s CHAIRMANOFTHEBOARD in the featured six furlong handicap at 2.20.

New customers only. Place your FIRST bet on any sportsbook market and if it loses we will refund your stake in CASH. Max refund for this offer is £20. Only deposits made using Cards or Apple Pay will qualify for this promotion. T&Cs apply. Paddy’s Rewards Club: Get a £10 free bet when you place 5x bets of £10+. T&Cs apply. 18+ Begambleaware.org

Min stake £5, min odds 2.0. Only deposits made using Cards or ApplePay will qualify. Free bets are awarded after the qualifying bet has settled, valid for 30 days, and must be used on multiples with 3+ legs. Max £20 in free bets. T&Cs apply. 18+ BeGambleAware.Org

The five-year-old won twice last summer but his handicap mark suffered as a result and it’s taken a while for the assessor to drop him back to within 2lbs of his last winning rating at Newmarket.

Chairmanoftheboard’s last two runs at Doncaster and York have been his best of the season and Buick could be the missing ingredient to get him back winning again with his latest efforts having both been franked in the meantime.

Buick has three more rides than Murphy on Friday’s Haydock card but it’s not all about the big two and Kevin Stott can continue his own excellent season with another win on Rebecca Menzies’ current stable star WYNFORD in the closing two mile handicap at 5.10.

Wynford runs here instead of Redcar’s 2.40 and that should allow ARCTIC FOX to add to her three wins for Richard Fahey on her fifth Flat start for new trainer Martin Todhunter.

Linda Perratt gives SIXCOR a blast on the all-weather at Newcastle tomorrow and the three-year-old has been running well enough to suggest he can win the 7.0 if he takes to the Tapeta surface.

I flagged up 11/4 Chepstow winner Tea Clipper here last Thursday and that chasing debutant’s trainer Tom Lacey is back in Wales this Saturday with GLORY AND FORTUNE.

The 6 year-old goes for the grandly titled Welsh Champion Hurdle at Ffos Las (4.0) and a 4lbs rise for his latest win at Plumpton leaves him dangerously well treated at the foot of the handicap

Trainer Noel Meade has saddled six horses to finish second since his last winner 16 days ago and this ultra consistent 4 year-old can get him back amongst the winners with champion jockey Colin Keane in the saddle.

Crassus has only won once in 23 starts but that maiden hurdle win has left him trickily handicapped over jumps and his recent Flat form suggests this run of the mill 45-70 with cut in the ground should be ideal.

Keane’s mount carries top-weight of 10-2 but he’s well used to a stone more over hurdles and his rider will be keen to make amends for losing his last race at the start when favourite to win at Killarney.