Skip to content
THE fight for the jockeys’ title between Oisin Murphy and William Buick is set to go down to the wire in a nailbiting finale. Buick’s three victories at Leicester on Tuesday saw him close the gap to Murphy to just four after the Irishman could muster only one win from his book of rides. And […] ...

THE fight for the jockeys’ title between Oisin Murphy and William Buick is set to go down to the wire in a nailbiting finale.

Buick’s three victories at Leicester on Tuesday saw him close the gap to Murphy to just four after the Irishman could muster only one win from his book of rides. 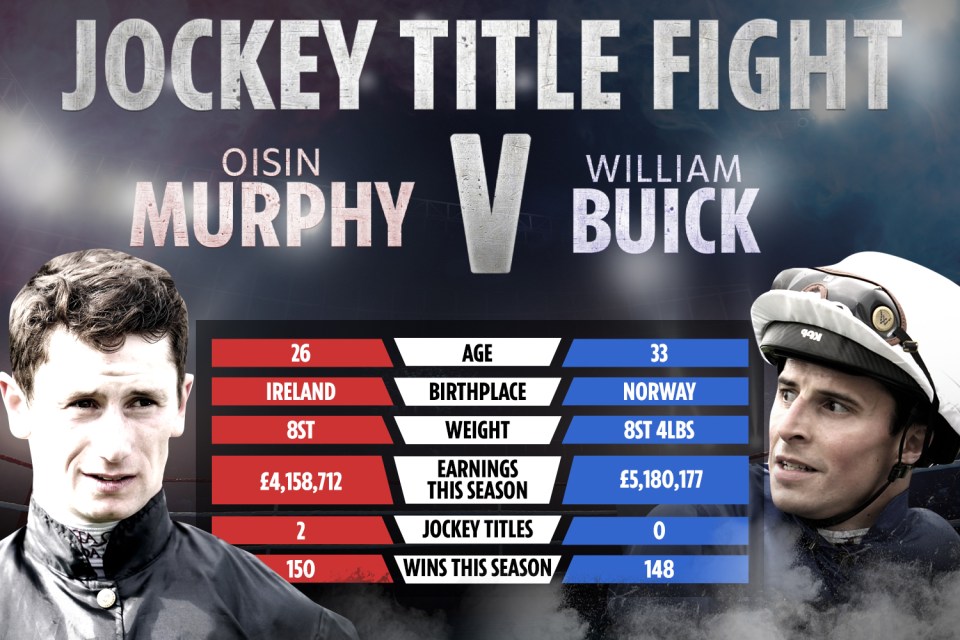 And that was cut to just two after Buick triumphed on 13-2 Zebelle in the 3.50 at Nottingham and backed it up on Raasel in the 4.25.

The chaser, who has never won the title before, has a total of eight rides on the day but both hit a blank before Buick’s victory on the George Boughey runner, which came just before another on Mick Appleby’s charge.

Murphy, the two-time defending champ, was on two favourites at the start of the day but failed to find a winner with two races to go.

Murphy, who missed key mounts at Newmarket last week after failing a breathalyser test, is clinging onto his slender lead over Buick.

Buick was booked in for eight rides on Monday and won the first – but in a bizarre twist three of his next four rides were withdrawn.

Still, he looks to be going Flat out to take the champ to final day of the season at Ascot.

There, in the star-studded Queen Elizabeth II Stakes, Murphy, who 150 wins this season, will be reunited with Andrew Balding’s three-year-old filly Alcohol Free.

Most read in Horse Racing

The Everest is richest race on turf worth an incredible £119,000 per second

It is not yet clear who Buick – 146 wins – will ride but he could easily go for Godolphin’s Master Of The Seas, who he finished second on in May’s 2000 Guineas.

The Revenant remains third-favourite at 13-2 but is weak in the market.

At the start of play on Monday, Murphy, who won Saturday’s big Cesarewatch handicap on Buzz, was as short as 1-6 to defend his champion jockey title.

Wins on Alcohol Free, such as at Glorious Goodwood’s Qatar Sussex Stakes, propelled him to the top with 148 victories at the time of writing.

By end of play on Tuesday Murphy was 4-9 to win the Flat jockey championship while Buick was into 7-4 from 2s.

Murphy, 26, looked to have the title in the bag some weeks back, but to his credit he always maintained the job was not done until it was official and so it is proving a thrilling head-to-head.

Buick, 33, banged in five winners at Newmarket last Saturday and another at Goodwood on Sunday – before his rotten luck hit on Monday.

The fight for top jockey will be decided on Champions’ Day at Ascot on Saturday.

The jockey previously got removed from his mounts in July 2019 for the same offence.

Murphy apologised for his latest setback and said: “”I was requested to take a breath test at Newmarket today.

“I blew under the drink drive limit but over the riding limit.

“I’m sorry to all the people I’ve let down today. I take full responsibility.”